"Thirty-six characters from different stages of life - representations of different times - interact in one room, moving in loops, observed by a static camera. I had to draw and paint about 16.000 cell-mattes, and make several hundred thousand exposures on an optical printer. It took a full seven months, sixteen hours per day, to make the piece. The miracle is that the negative got through the process with only minor damage, and I made less than one hundred mathematical mistakes out of several hundred thousand possibilities. In the final result, there are plenty of flaws black lines are visible around humans, jitters caused by the instability of film material resulting from film perforation and elasticity of celluloid, changes of colour caused by the fluctuation in colour temperature of the projector bulb and, inevitably, dirt, grain and scratches.” 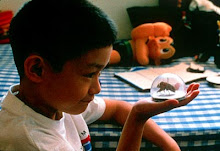